How to trust your team when they’re remote working

As lockdown has gone on, we’ve heard leaders and managers telling us their team is communicating better than ever because they’re, “making much more of a conscious and deliberate effort to talk to each other.”

What they’re inferring is that their team is trusting each other more.

Partly this is because people have had no choice but to get their heads around working differently with their colleagues. And in many cases, it’s working out fine.

For example, if people are homeschooling or caring for relatives they may be doing work earlier or later, or they may not be working during the day.

When work is asynchronous like this, it pushes you to trust each other, and it also highlights the need to communicate more clearly (at the end of the day if you’re managing a team, it always comes back to the way you’re communicating.)

The constraints of asynchronous working lead lots of teams to develop more trust.

At the same time, however, it can also bring up tensions, when for example you trusted John to do the work, and he isn’t doing it, and you can’t see him, and he stays quiet in remote team meetings…

So what do you do about that?

Why trust breaks down

When trust breaks down it’s usually to do with underlying performance issues that were already present before you went remote. Perhaps fear of conflict or a cultural reluctance to call stuff out stopped you from talking about it.

And if you don’t trust your people in the first place you can create the very conditions you want to avoid.

If people have gone off-grid or they’re not communicating, or not turning up to meetings nor answering their phone, it’s very difficult to find out where their heads are at, or if there is a problem. Of course, there may be nothing wrong and you may be worrying unnecessarily. It’s worth checking before you make it worse.

So you are going to have to have a conversation. That should be a simple thing and if you’ve done the groundwork it usually is. If you are starting from a place of low trust though, there are still things you can do to reduce the chance of a conversation getting difficult, or that can make it easier if there is no avoiding it.

So how do you build trust?

One thing that helps with this is to use planning tools such as Trello, or Microsoft Planner (inside Teams), to visually capture the work that people have on.

They’re a great way to encourage people to share their ideas on how they will approach a task and invite input from their colleagues, and we’ve seen that they help to build and maintain trust. (See also another helpful tool CPORT.)

When using a planning tool, people either volunteer what their focus is going to be, or you all have a conversation about the current priorities and what the next steps are, and these get mapped into the tool.

You might have a list of projects or current tasks, you allocate these into columns in the tool and organise them either by person or using a colour coding scheme or by whatever it is that people are doing. 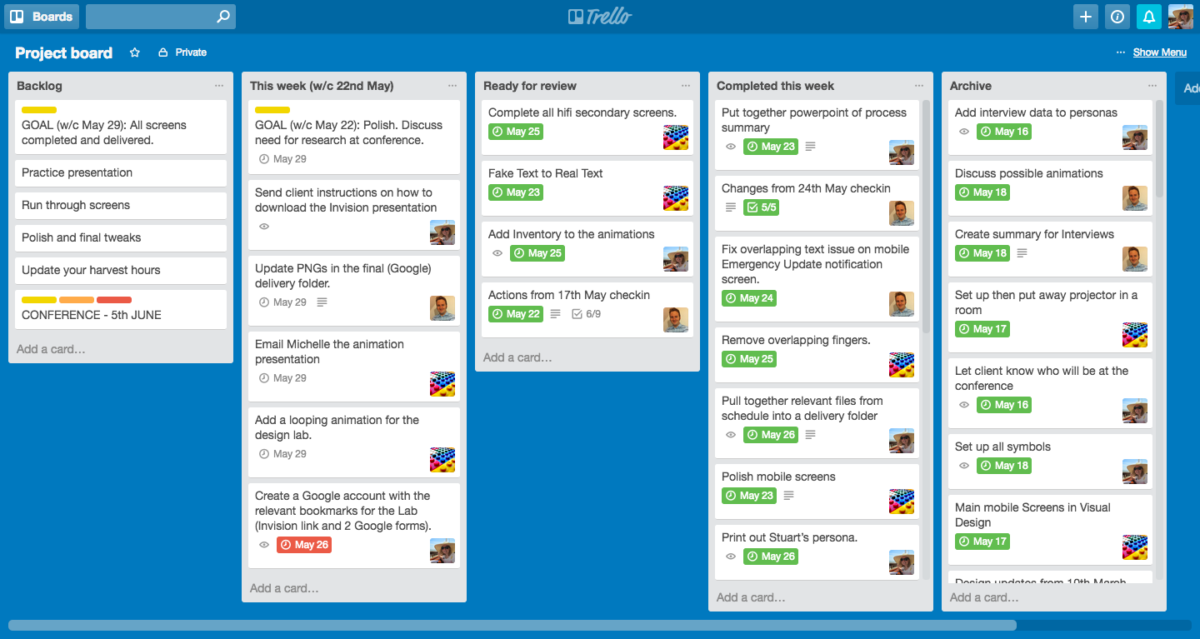 You can find out more about this approach by researching Kanban (though try to keep it simple.)

There are three important things about doing this:
1. It increases the clarity about who’s doing what and when it can be expected.
That’s good, particularly if you’re not together all the time.

2. It builds accountability.
The visual representation of work makes it much easier to hold people to account. It creates a public domain where it’s harder to renege on your commitments to your colleagues.

3. It enables ownership
If you can use it to frame how-to and what-if conversations as part of discussing the work, it really helps people feel full ownership of their tasks.

Using the tool simultaneously solves the problem from three angles – by making it clearer how to tackle it and what’s expected at the end, and by making it more public – these things really motivate people to get things done.

It also makes it easy to see when things are not getting done.

Using a shared planning tool like a Trello board is a great medium and focus for a weekly update.

You may still need to have a difficult conversation

Using these tools with a colleague doesn’t necessarily take away the need or the challenge of having a difficult conversation. But at least it gives you a great deal of clarity around what you want to talk with them about, like the fact that x y z hasn’t been done. And it gives you an excuse to explore what might be causing it.

It’s not just about the task

We’ve seen lots of teams deliberately creating a social space where it’s not about work.

Some lovely examples include teams having online craft sessions or trying to teach each other how to crochet or whittle, these things help because they are acknowledging that a job is not just about the task, it’s also about creating connection.

It’s easier to practice this in a social context rather than a task-focused one. And in this safe context may help you when quality or capability issues means there’s a lot more at stake.

Connection continues to be an important way to build trust in a team, which is why we’ve already talked about tools like check-ins at the start of meetings to help people do that.

Other ways for managers to build trust

It’s helpful to have mechanisms in place to help people communicate when they’re harder to reach, because they may have other stuff going on.

So are you having a conversation about how you use email? Or how you use a tool like Teams or other chat platforms like Slack or WhatsApp?

Are you clear what your expectations about responsiveness are? Are you helping people communicate what they’ve got on so you can see how busy they are? Whether that be work-based or home-based stuff.

And are you having the conversations that allow people to renegotiate that stuff?

We’ve been working with a client where one person on their team is consistently not performing. The rest of the team feel that this person doesn’t do what they say they’re going to do, or keeps doing the wrong kinds of things. The person in question puts in a lot of effort but it doesn’t add any value.

If the manager ever brings it up, they react aggressively, so the manager has stopped bringing it up and the team just work around them.

The challenging person is trying really hard to contribute, and is aware there are issues, but doesn’t really know how to engage with them, and doesn’t know what’s wrong because no one’s prepared to spell it out.

And their aggressive reaction causes a counter-reaction, which is leaving them bewildered and less clear because they don’t understand that their response is experienced as aggression.

Everyone is aware that these issues pre-date lockdown, but for various reasons, they haven’t been able to deal with them.

What’s become clear is that there’s a lack of clarity around roles and expectations, and there aren’t sufficient mechanisms, or time, to actually address them.

There are a lot of misunderstandings all around.

As a manager, the first thing to do is to address those misunderstandings. And to encourage the people involved to practice behaviours to create clarity, for example:

Firstly, asking for clarity both when you’re issuing an instruction or request, and when you’re accepting it.

Secondly, helping people let go of their performance anxiety, and making it okay to submit something that’s not finished and ask for feedback in order to create a better understanding of what’s expected or acceptable.

That might take a little while and need a few iterations. So patience and generosity are helpful on both sides.

How to have a difficult conversation

What is clear is that you can’t resolve an underlying capability issue until you have resolved the overarching communication problem.

So if you have a similar situation, you should talk to your colleague, because you first need to understand their context and their concerns. It might be that there is an acute local issue, such as needing to care for a family member, or relationship difficulties or illness. It might be that expectations about outputs are miles apart. It could be a capability issue. It could be anything. You’ll need to find out, and it helps if you’ve already been working to create the conditions that make it safer to be candid, and easier to be clear.

If you’re worried about having a difficult conversation, it’s often helpful to lead with an emotional aspect of it, talking about how you feel, enquiring how they are experiencing it. You can try using a structure (like Circle of Influence) to frame a hard conversation and keep it open and exploratory rather than accusatory and defensive.

You create conditions of trust by modelling it with your own behaviour. A really helpful way to do this is to show your own vulnerability, and acknowledging when you are uncertain or anxious.

If you can do this you’ll create a space that allows others to talk about what’s really going on for them. And then maybe you can start to sort it out together.

Situations may mean that you may have to work in very different ways. By and large, you can trust people to make the best of it; most people are conscientious and they want to get the job done well.

If they can’t do that, finding simple processes that clarify expectations and encourage accountability is helpful. Creating the conditions that allow people to ask for help, or for you to raise a concern safely, requires some considered effort on your part and there are simple things you can do every day that will make that easier on the occasions you need to do it.

But whatever you do, it’s almost always better to start with an assumption of trust.

We use cookies to ensure that we give you the best experience on our website. By continuing we'll assume you're on board with it.Ok